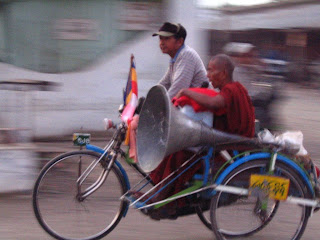 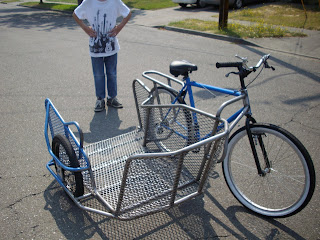 A sidecar, with checkers and "Yellow Pedicab" printed across the side, yet it appears to be selling pizza and not pedicab rides!
Posted by Eric Cornwell at 1:14 PM No comments:

Wednesday was this machine's debut for pedicab service. The pics are from Thursday night when the canopy was just completed. Friday my night was cut short because something finally broke. It happened to be a bolt that clamps the sidecar to the bicycle chainstay, which will have to be replaced by a meatier one. Nothing like real-world testing to successfully locate the weakest points of my design that need improvement. It is reassuring too, I think, that it was a bolt that failed first and not any of the welds or tubes. I had to ride home 2 1/2 miles with enough lean to keep the sidecar floating.

Posted by Eric Cornwell at 4:46 PM No comments:

One year of sidecar bicycles

One year has passed since I built my first sidecar bike, and now I am on my third. I have been attracted to the sidecar setup ever since 2009, when I began driving an imported India rickshaw here in Athens. First off, the Raja Royal was super heavy, and probably should not have been driven anywhere but on the bike path. Navigating steep hills was either toilsome on the way up or unstoppably fast on the way down. But besides the drawbacks of working with and on such a bulky and foreign machine, it certainly made me fall in love with pedi-cabbing in general. And when I found out how sidecar bicycles are built and used in various parts of Southeast Asia, I came to realize how this could solve most of the problems of pedi-cabbing in hilly Southeast Ohio.
Sidecars have a number of advantages, but the most important one is weight. The Raja Royal was a trike so heavy I didn't even want to know how much it weighed. The latest sidecar is light enough that I can pick it up easily. The advantage is most notable when climbing hills, but also in negotiating curbs, or when making emergency stops. The slight disadvantage to less weight is that the wheels may lift off the ground when cornering sharply. To counteract this, the driver must lean heavily into corners, which makes things interesting. Properly conducted, however, a sidecar has a level of agility much closer to that of a bicycle than that of a rickshaw.
Another distinct benefit of the sidecar is having your passenger in a more conversational arrangement by your side. It is nice to be able to see who I am driving and how much fun they are certainly having while on board. Since my passengers seem to almost always want to ask me questions, this is a great way to have it.
On my latest version, the car itself is detachable from the bicycle. This makes owning and building pedicabs far more convenient, because I don't have to sacrifice a bike by permanently welding an addition onto it, nor do I have to build completely from scratch. Also, once it has been built it can transform from pedicab back to a bicycle for seasonal storage.
Another thing about the sidecar is that, for a pedicab, it is very compact. sidecars are usually both narrower and shorter than traditional rickshaws. This makes it far easier to bring it onto sidewalks, where it can more easily entice customers.
One thing I heard yelled from the sidewalks when I drove the Raja Royal were comments like, "This isn't China!" "We're not in China here!" People had some pretty strong cultural prejudices regarding that type of vehicle, it seemed. In contrast, when people see a sidecar, they usually respond positively. Perhaps it is because our culture is at least familiar enough with sidecars, usually in the context of motorcycles, to be able to assimilate the idea of a bicycle sidecar.
The first build I call the Skruvskar, because its seat is made from a recycled Ikea office chair.

This being my first sidecar, it taught me many things good and bad about sidecar logistics. It has been on  many an interesting ride and carried many a drunken a passenger. It has a three-passenger limit, and I found out what happens when the limit is exceeded a few times. As the wheels get more and more splayed apart and the bike leans toward the sidecar, the vertical load imposed on an angled wheel will eventually fold it. for this reason the car must be firmly braced to prevent flexing, and sturdy or smaller diameter wheels should be used because they incur side-loads that most wheels are not designed to handle. The Skruvskar's frame was made mostly from 1/2" electrical conduit, which I discovered was much too flexible to stand up to the abuse I was giving it. I had to repair and re-weld the thing at least a half dozen times, and is still far too deformed to go back to carrying two to three passengers regularly. One part of this car I really like is the backseat made from a bike frame's rear triangle and seat, with handlebars that had a pair of klaxons on either side. It also has a coaster brake on the car wheel, operated by a foot pedal. 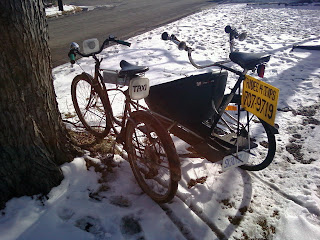 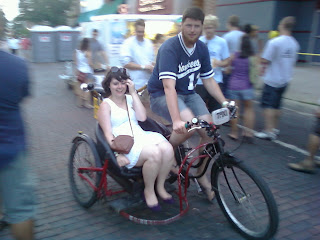 The next sidecar I built is called the Widecar. Simply because its...wide. 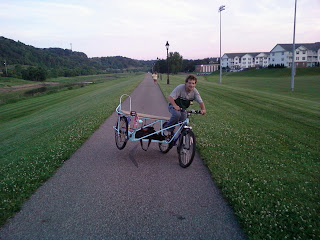 The idea was to build a 4 passenger sidecar, if possible. The base was made from recycled bed frame angle iron, and the rest 1/2" conduit. It became a tandem when I added a recumbent seating position with a crankset linked to the sidecar wheel. With a stoker on board, it was able to reach a good cruising speed. Unfortunately, the driver pictured wrecked into a curb because his passenger, already on the far right side, was leaning even more to the right when a left turn needed to be made. They both recovered, and so did the Widecar too, for the most part. It was also brought to the PawPaw fest last year, where the kids got to have fun on it until the wheels were shot to hell. I still haven't had it working since it went out on Halloween.
And so, here comes the newest iteration: 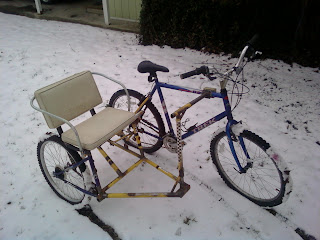 The Decidecar - because you can decide whether or not it stays attached. It was made almost entirely of recycled bike frames, with conduit used only on the armrests. The thing I like about this design is that it can be adjusted for camber and toe-in. A sidecar works best when the wheels are not quite vertical but very slightly angled in at the top. Also, the sidecar wheel should track not straight ahead, but very slightly towards the bike. Being able to tune these adjustments, I ended up with a sidecar bike that can be ridden no hands, which is always a good sign for a customized bike. 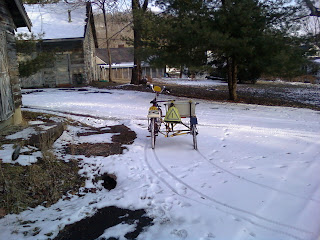 This car has a 24" wheel instead of 26", so that the seat can be over the wheel and the track width be fairly narrow. What I failed to do is place the wheel in the proper fore/aft position. It is a few inches behind the bike's rear wheel, when it should be either in line with or ahead of. This makes it such that coming off a sharp dip while loaded may cause a tipover, so I may need to add a safety wheel to catch the bike should that happen. This version also has a third brake, again operated by foot pedal. Braking the sidecar wheel is tricky, however, because sharp braking will certainly pull the vehicle to the right unless both rear brakes are applied together. When all three are put to use, though, this thing sure stops quickly. 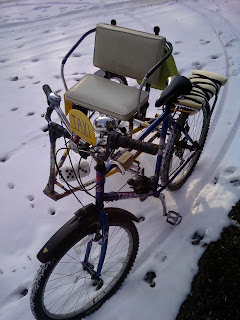 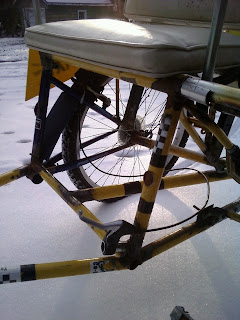 Posted by Eric Cornwell at 4:41 PM No comments: