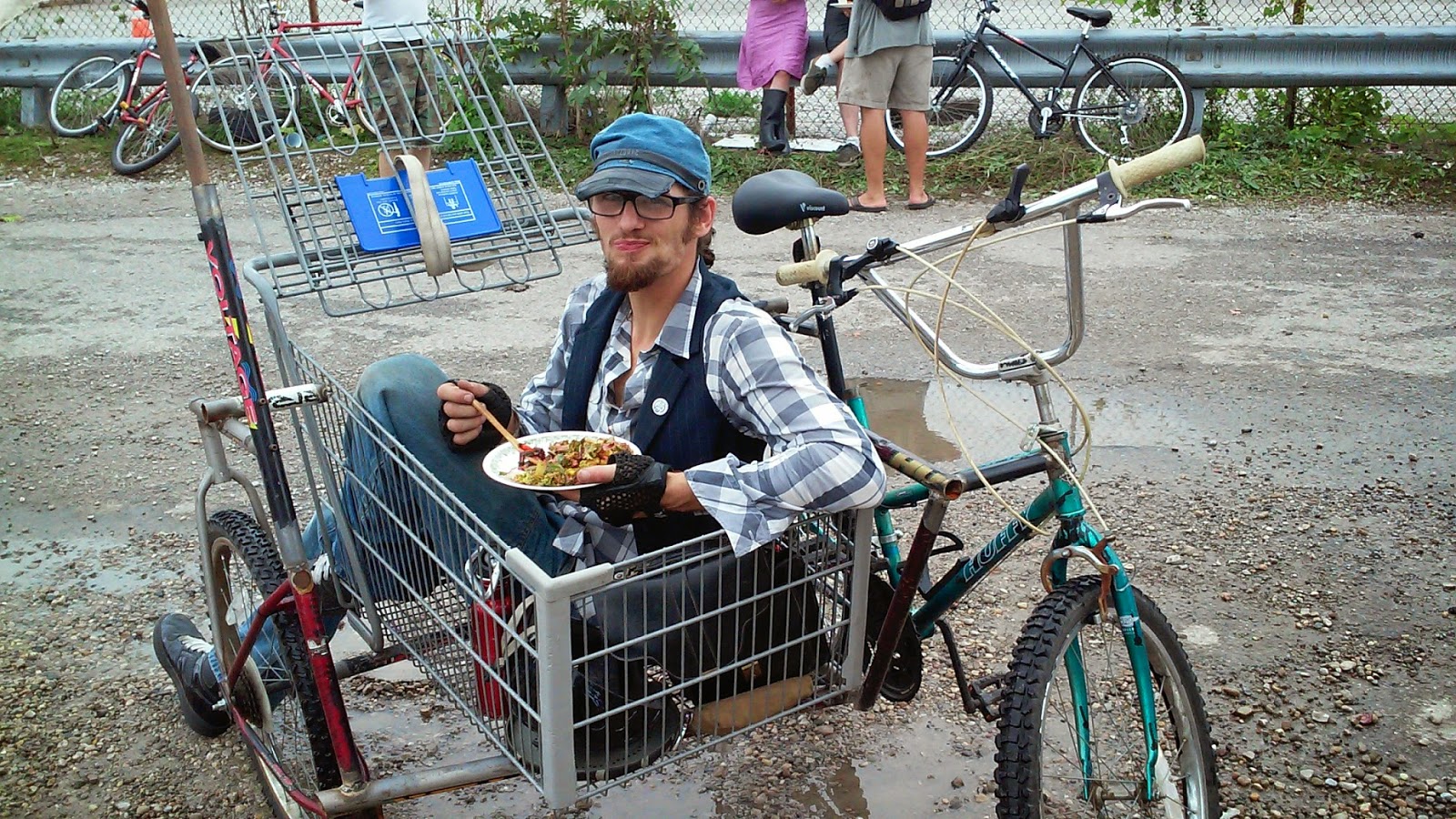 Lots of bike stuff has been happening! Here's a bunch of words and pictures:

In March my mate and I traveled to Columbus for Oh!o Oh!o, which was a regional planning meeting for Bike!Bike!, an international conference for bike collectives and community bike projects. We checked out the clubhouse where the Righteous Mothers build their tallbikes and I decided to plan on leading a workshop there on how to build a cargo sidecar.

In April I entered one of my pedicabs into a competition by ReUse Industries for items recycled into either functional or artistic pieces. The Widecar Junior won 2nd place in its category!

Between April and June I made a new pedicab. This was intended to be a easy to rent, lightweight 2-passenger sidecar that would be stable and easy to handle. The 20" workhorse is a beach cruiser with extended back and front end. The steering geometry was customized for better sidecar physics compared to a standard bicycle fork that has more trail. It was named The Blue Dwarf.

I also learned how to sew this year with a handed down Singer Rocketeer. I made some costumes and hats to wear pedicabbing. The sewing machine also comes in handy for tailoring seat cushions for my bikes.


I got my first tandem in May and ride it with my mate which is pretty awesome.


This year once again I biked to the Nelsonville Music Festival and provided pedicab service outside the festival area among the parking lots, campgrounds, and sometimes the Nelsonville area. Dan contracted a rental bike for the first time and rode the Widecar Junior.

Bikes Bring It was contracted in June to provide service to the Perry County Art Walk. Dan and I traveled to Somerset, home of the oldest Catholic church in Ohio and we rode folks on the Rasta Buggy and the Blue Dwarf, although the Rasta Buggy was starting to have serious hub problems that I had to fix with some washers from the hardware store on the square. The mayor who found me through the Paw Paw Festival last year was very gracious in hosting us for his event.

We brought the Blue Dwarf, a commissioned woodbarrow, and some other bikes to Summer Solstice at Wisteria for general good times and a few tips.

The rest of the Summer I was working my other trade, carpentry, which involved doing an addition on a house from start to finish on my own.


Just two weeks before my 30th birthday I got a bike tread tattoo on my arm that I have been considering for a long time.

Then, as we geared up for Bike!Bike! 2014, I finished the frame redesign on the Bumblebee to sell it to an interested buyer in Oxford, Ohio. Columbus would be our meeting point to make the transaction, and then Bike!Bike! had a huge critical mass ride and I did that cargo sidecar workshop I had wanted to do.

In September I got back to pedicabbing Athens after a summer hiatus.

The Paw Paw Fest had the Blue Dwarf out at Lake Snowden this year, where I made just over my vendor and beer expenses for the weekend. 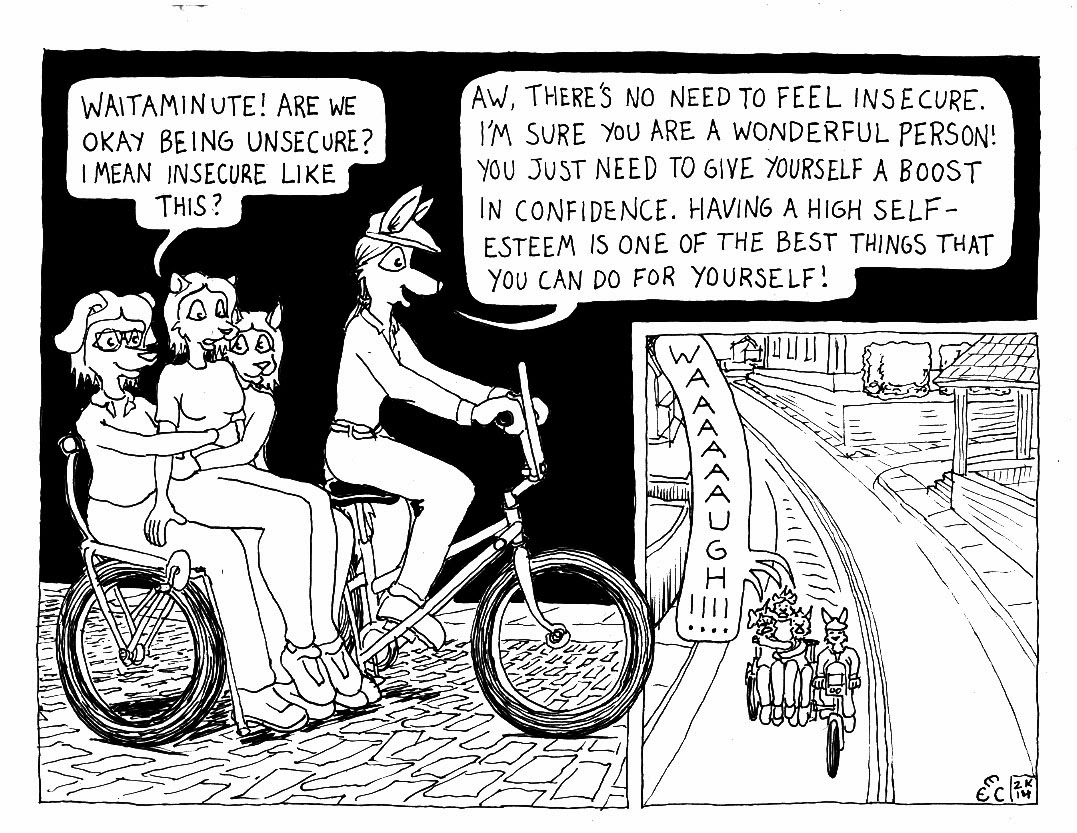 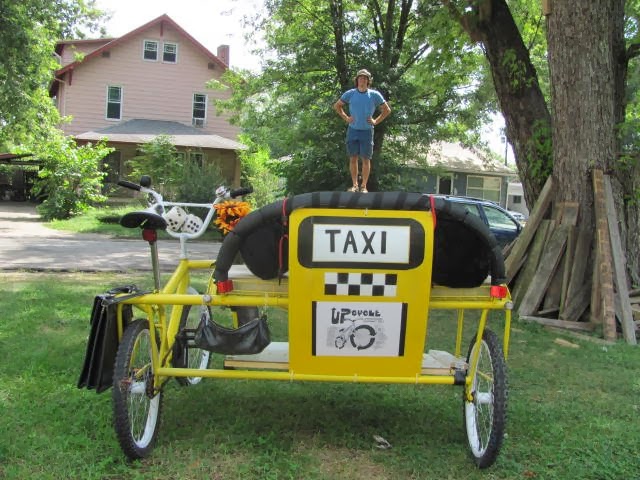