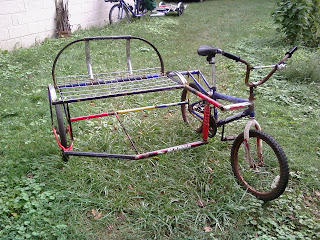 Here's my newest sidecar project that's coming together. This one is a 20" kids bike with a double bench seat welded permanently to the side. My biggest obstacle so far in creating sidecars is that they have a tendency to ruin wheelsets, usually when handling loads on uneven surfaces. Ordinary 26" wheels are not meant to handle side-loads, and I found myself replacing them often on the Widecar. Even the 24" wheels on the Decidecar and Arthur's sidecar were being warped periodically. Therefore, I decided to make a model with 20" rims all around, like the Filipino sidecars. Such wheels are almost as readily available, and much better at holding their shape.
Since the donor bike began its life as a little tyke's rig, it had a smaller size bottom bracket and short cranks on it. My first step in making it a suitable workhorse was to do some BB surgery and replace it with a standard-size crank housing. Using the original rear wheel and sprocket with a MTB crankset gave it an appreciably low gear ratio, with longer cranks plus a smaller chainring. It will only have one speed so I wanted to be sure it was set up with lots of torque for hauling and hill-climbing.
I also had to remove the original seat, which was so rusted in place I was afraid that I would never get it out. With persistence,  a little grinder action and a lot of WD-40 I was eventually able to extract the bugger and put an extra-long seatpost in its place. 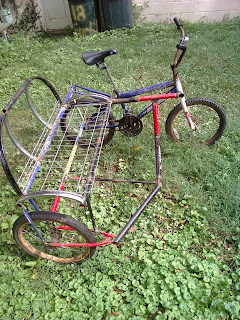 Once the bike was ready I began chopping bike frames for steel tubing. I think I ended up using at least four donor bikes for this. I discovered that certain bike frames have tube diameters that allow the seat tube to be sleeved into the top tube, which then can be sleeved into the down tube at the other end, resulting in a tube about 4' long that is straight, rigid, and easily welded together. Not all my donor bikes had that fortuitous combination of tube diameters, so I had to practice doing butt welds, which are harder to make straight without a jig.
With the sleeved tri-tube I established the overall width, going from just above the back wheel of the bike to a similar point above the outrigger wheel. My goal was to create a bench seat that could easily seat two, because that seemed to be the configuration most desired by passengers. From my experience pedi-cabbing, it is most likely that fares will involve two passengers, if not three. Most of my other sidecars (except for the Widecar) were designed for one passenger, with a little extra room in case another had to be squeezed on. On some the second passenger seat is present, but more as an afterthought than a deliberate aspect of the design. This would usually mean it would take some convincing to assure potential passengers that there was indeed room on board for two people, even three if they were desperate. But this is not the best way to lure in potential fares. I needed to make it patently obvious that the craft I'm piloting will fit two people no problem, and a third without stretching the imagination too much. The Widecar fits this ideal on the surface, but falls short because it is not sturdy enough to properly handle the three-passenger load that it seems large enough to carry.
Consequently, this machine ended up being wider than it is long in overall dimension, which is why I'm calling it "Shorty". As a result, it is very stable. It is virtually impossible to lift the back wheel when cornering hard to the left. It is still possible to lift the outrigger wheel turning right when unloaded, so leaning right to make hard turns is a must. Once loaded, however, this vehicle is very forgiving and can be wheeled any which way without needing special care to keep the wheels down.
Here's the completed frame entering the painting stage: 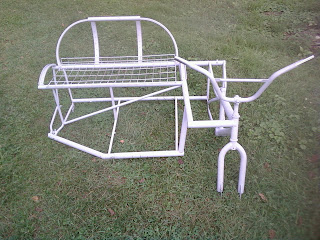 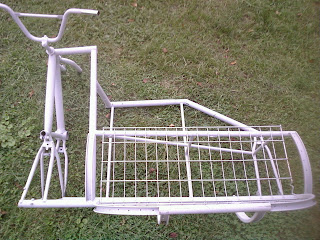 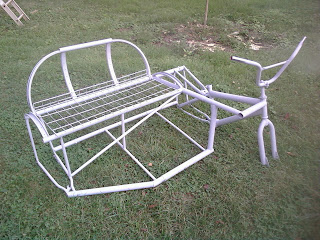 Here's the completed bike after paint and accessories 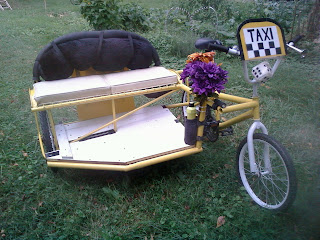 Posted by Eric Cornwell at 7:42 PM No comments: