At least that's the working title I just made up. So named because I chopped up this round outdoor table for a steel donor, besides multiple different bike frame tubes. 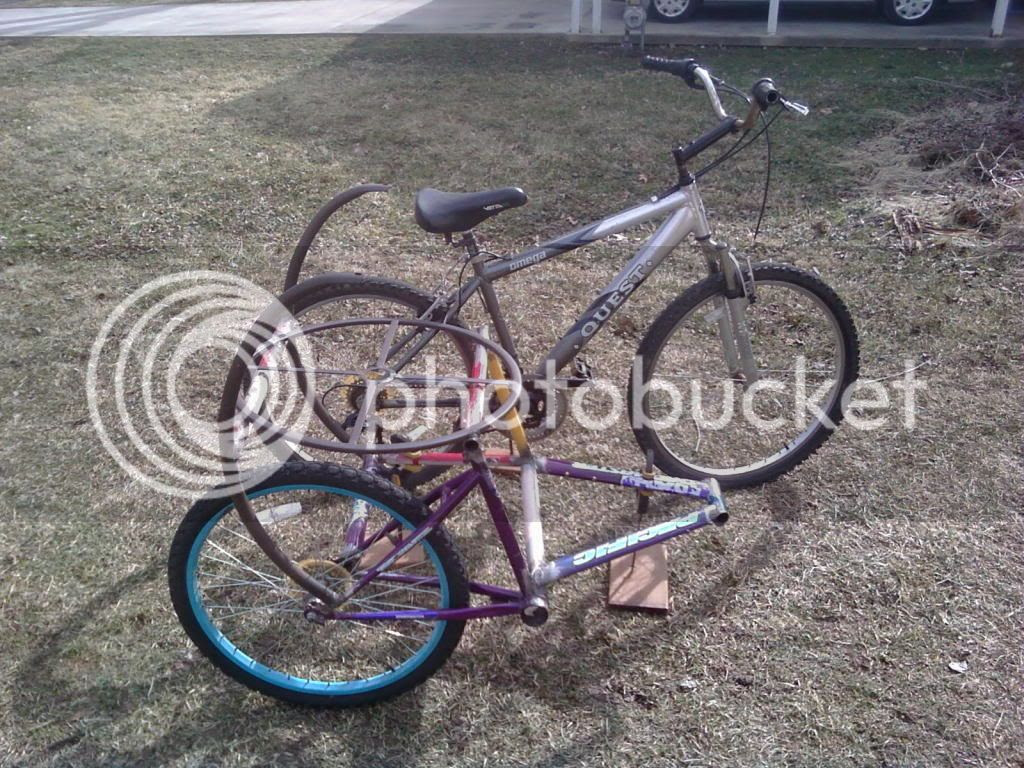 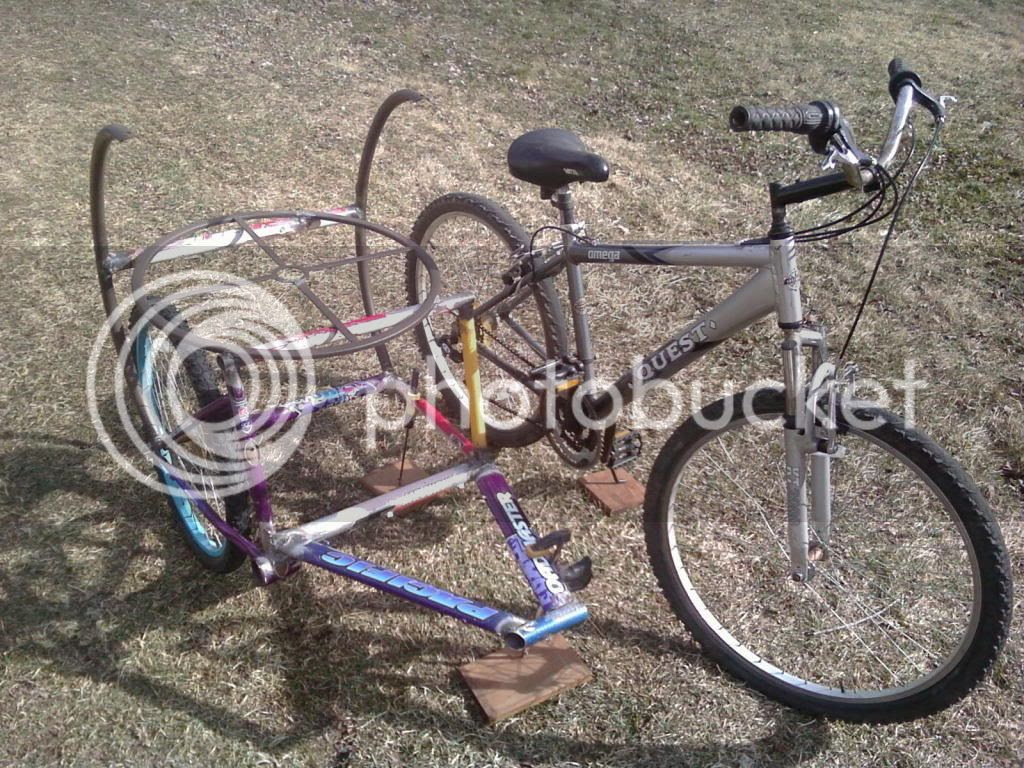 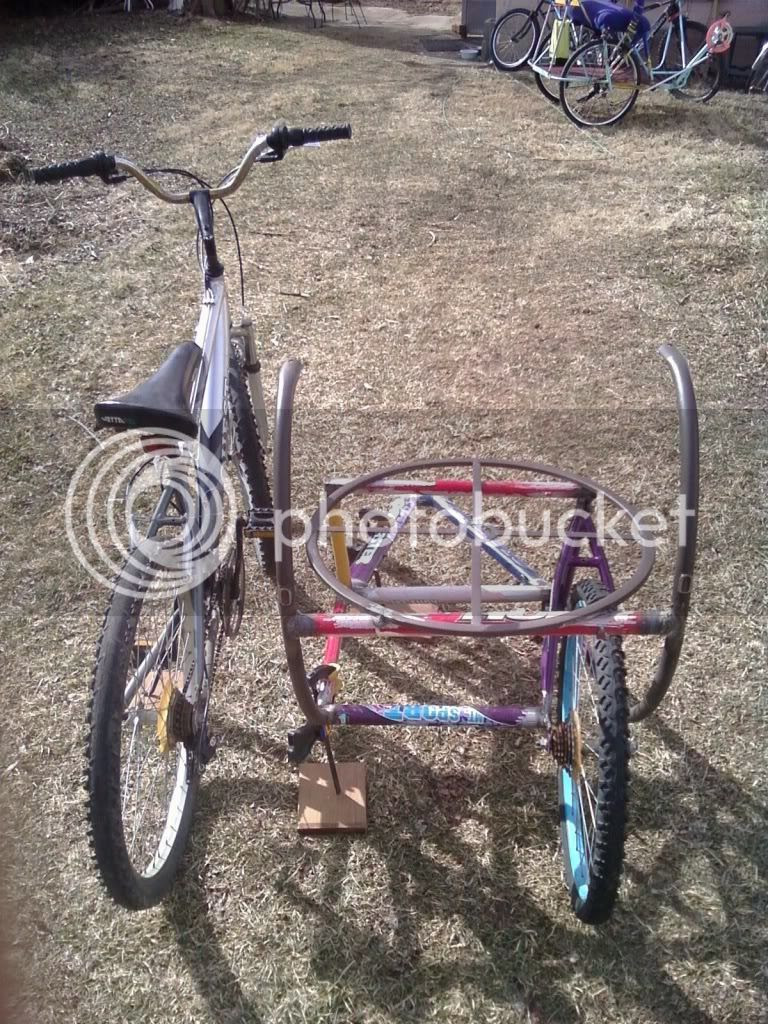 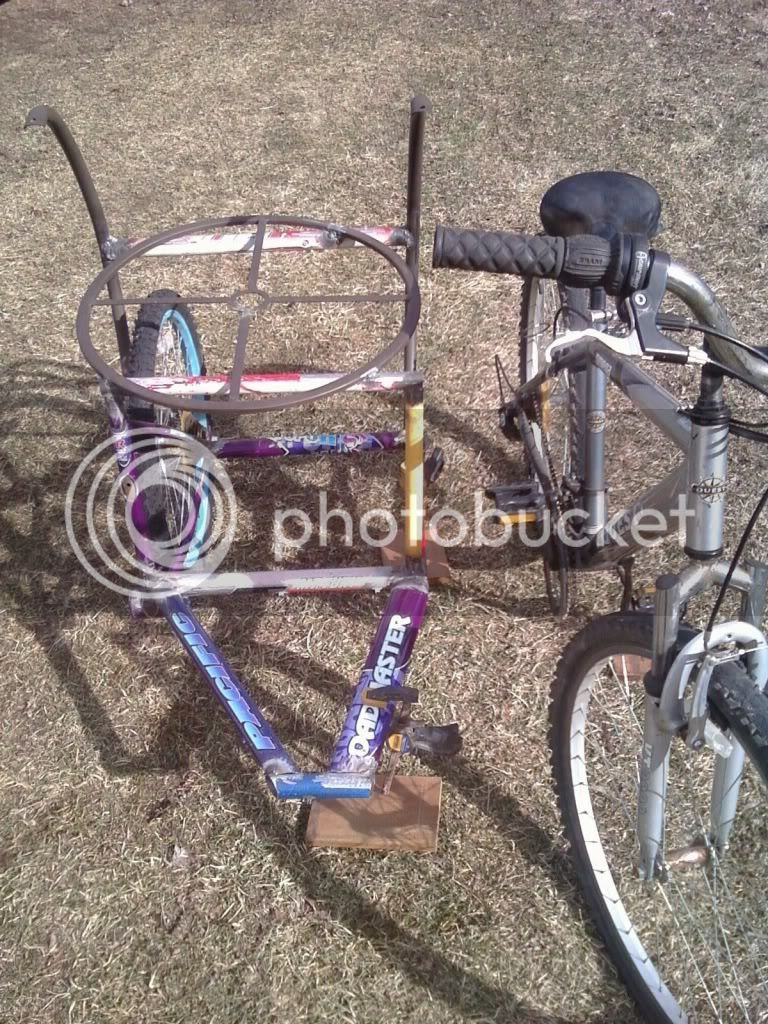 I plan for it to have stoker pedals like the Widecar, only centered more and running a chain to an axle that transfers power out to the side and then through another chain to the wheel.
Edit:
I chose a different bike to pair the car with, and set it up with only three attachment points. Other sidecars I've made have all had at least four points of connection, yet this arrangement is as stiff as any I've made yet, and far easier than the Decidecar to unmount and re-attach. PLUS, this model gives more pedaling room to the driver than any other I've made yet, which is great! No more bumping of the right knee on the front connection or catching of the right heel on the chainstay connection. 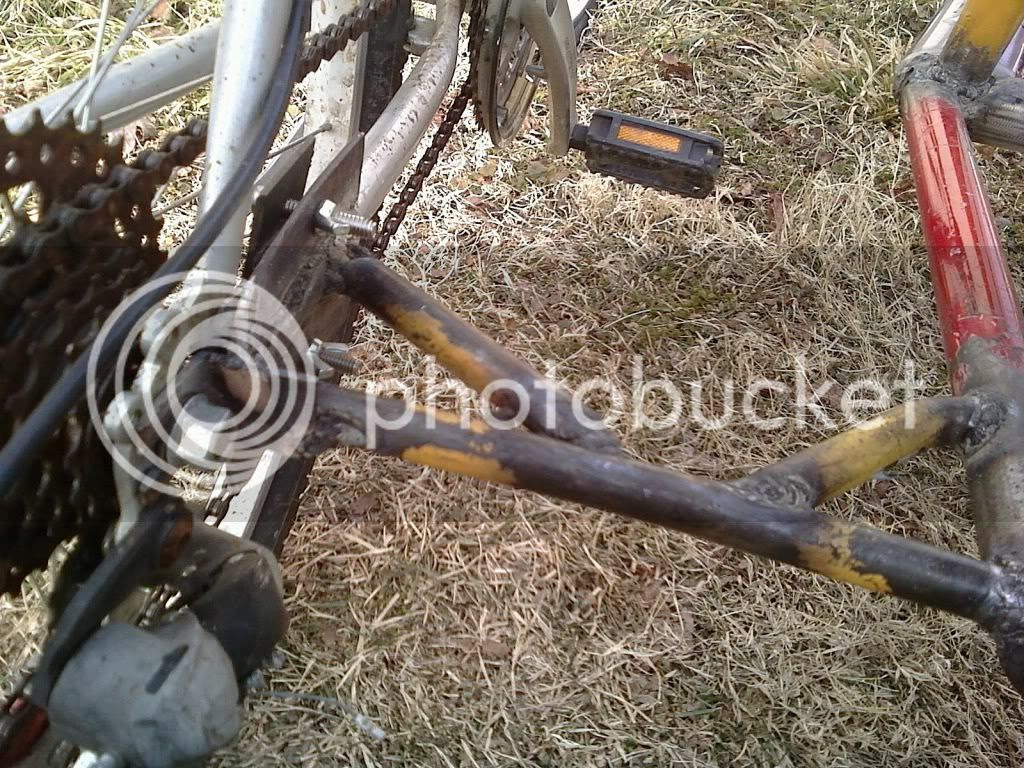 Here is the axle/chainstay connection. Originally, it was two parallel seatstay tubes going over to the compression plate, but I realized it would impinge upon the pedaling action somewhat. So I chopped the forward one in the center (well, close anyway) and angled the tubes aft to connect with the other one. There are two bolts on the compression plates holding the chainstay. After a bit of testing, I noticed there was still some play in this area, so I added a bit of angle iron and cut dropouts into it to be held by the axle nut of the donor bike. Super solid hence. 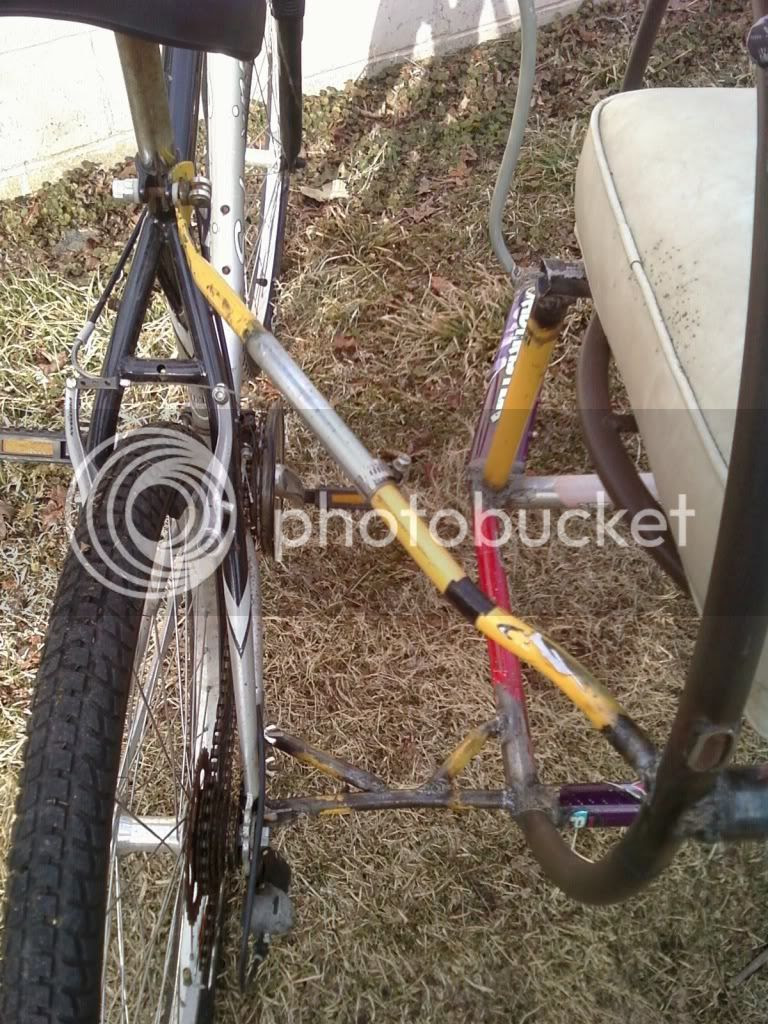 Here's the seatpost connector, fairly easy to connect and remove. It's a recycled chainstay with the dropout fitted between the nut and quick-release cam. The other end is welded to the frame and in the middle is a sleeve tube and hose clamp to be able to adjust the camber of the vehicle. Having a bit of camber makes cornering a little easier, but too much and the wheels will suffer under heavy loads. 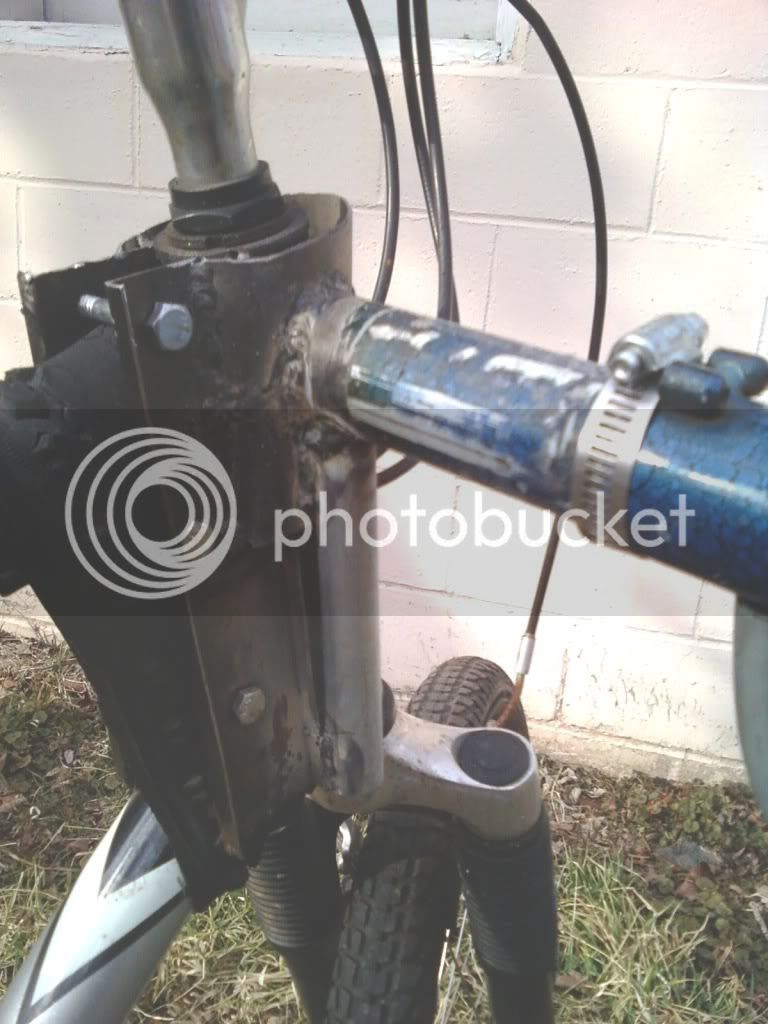 The head tube connection. First, I sliced open a piece of 1"x 2" rectangular tubing lengthwise on the 1" side, turned the halves away from each other, and added some oversized oval down tubing to connect them around the front of the head tube. Three bolts hold it on while recycled tire rubber protects the frame. The tube projecting out from it sleeves inside the front attachment bar and is only about 8" long. That way, you can remove the car by sliding it off from the front attachment point and ride the bike itself without the car and not have to hassle with removing the three bolts. ( The Decidecar works this way as well, only that the longer tube is connected to the bike and the shorter one comes off with the car.)
After a little testing, I noticed this connection was a bit flexy, so I added that little piece of 1/2" conduit for stiffening. The slider here allows for tracking adjustment of the sidecar wheel. If the wheel is parallel, it happens to drag one side of the bike enough to make no-hands riding impossible, except for short periods. By giving the car wheel a bit of toe-in, the drag is mitigated to where the vehicle rolls in a straight line when unguided.
Then I made some convoluted attempts to link up the sidecar's drivetrain, which ended up looking like this: 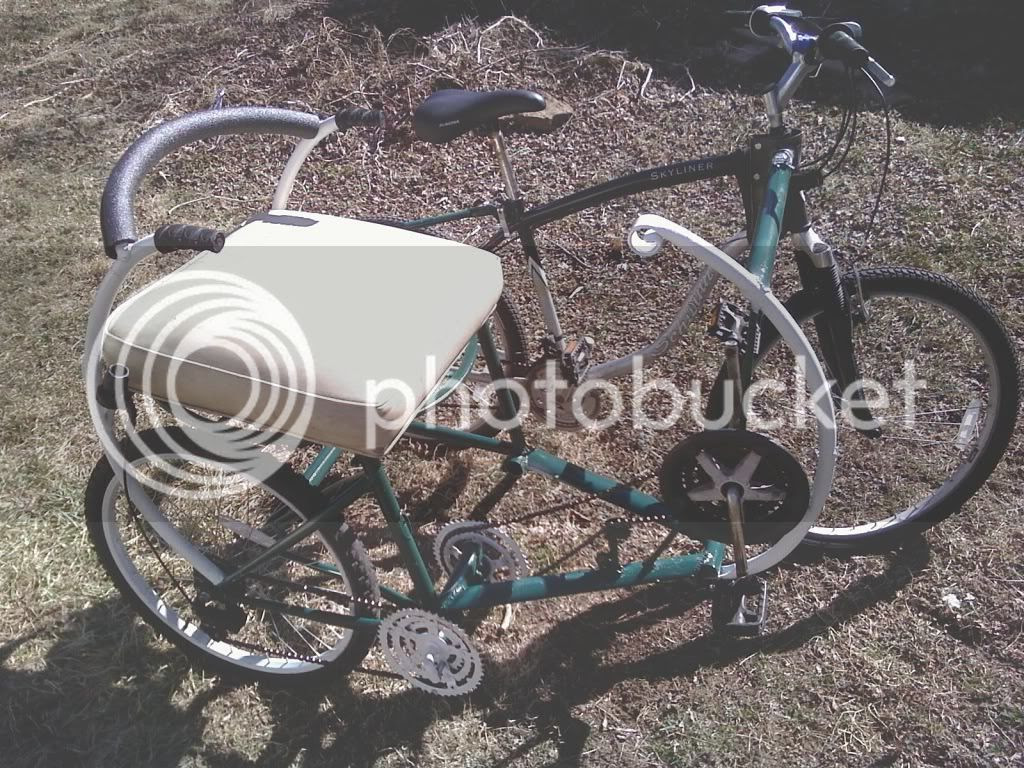 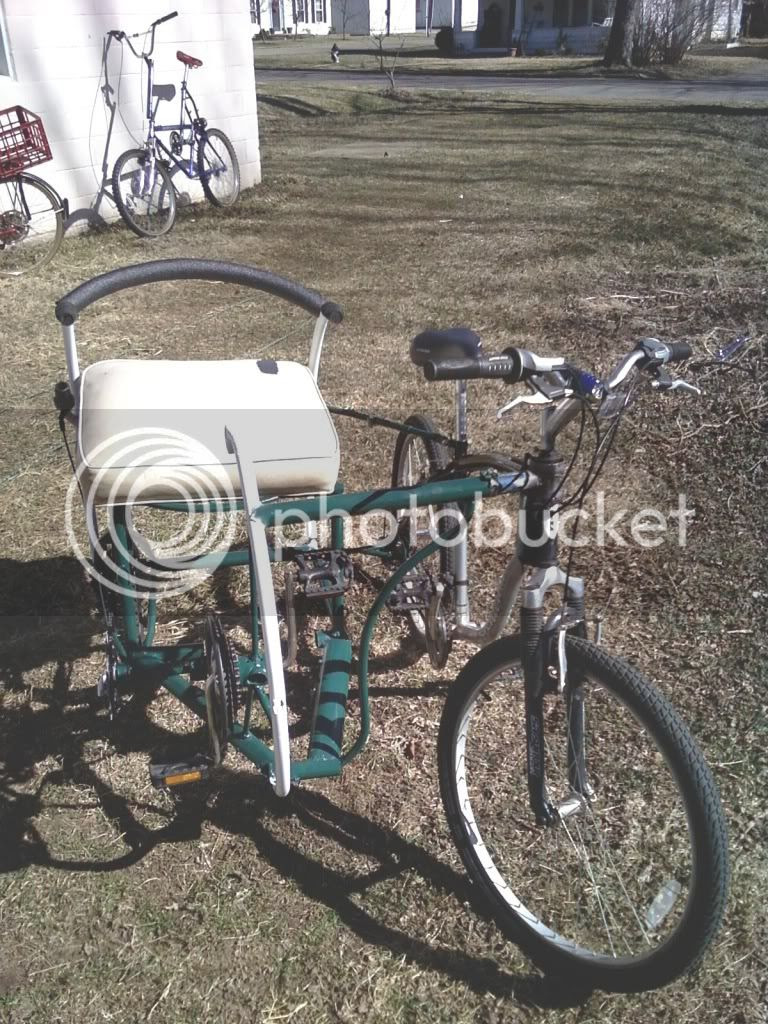 Posted by Eric Cornwell at 6:59 PM